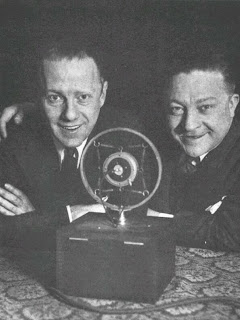 By June of 1944, the war was still far from over, and many folks on the home front were naturally anxious to do what ever they could to help the war effort. One effect of this was that people began to see spies around every corner and under every park bench.

The threat of espionage was of course very real, something that the authorities did not take lightly. Old Time Comedy? They might have taken it lightly!

The June 2, 1944 (just four days before the D-Day invasion) old time radio episode of Amos 'n' Andy opens with Amos, Kingfish, and the boys down at the Lodge Hall, discussing the movies they had seen the night before (four features for twenty cents no less!) One of the favorites was a spy picture. All the sabotage and mayhem the spies create worries our heroes, until they realize there could be a reward for actually catching a spy. It turns out Lightnin' has a job at a hotel (doing anything "too heavy for a maid but not heavy enough to hire a man") and he thinks there may be a spy staying there.

Lightnin' is sent back to the hotel with instructions to check things out as indiscreetly as possible (how indiscreet can you imagine Lightnin' could be?) It turns out that his "spy" is Austrian-Hungarian actor Paul Lukas. Lukas is nervous from play a Nazi in his last picture, and wants to leave the typecasting behind, if he can just convince Jack Warner! Lightnin' overhears parts of his conversation and finds a publicity photo of Mr. Lukas in the Nazi uniform. This information is enough for Amos and the Kingfish to set a trap for the spy. They introduce themselves to Lukas, acting like spies themselves, hoping to get invited on a sabotage mission, and call the cops before it is too late so they can collect the reward.

Mr. Lukas turns the tables by seeming to go along with everything, except that he calls the police first! Seeing spies where they aren't could happen to anyone. After all, the same thing happened in radio espionage to Fibber McGee just a few weeks before.
- Old Radio Cat