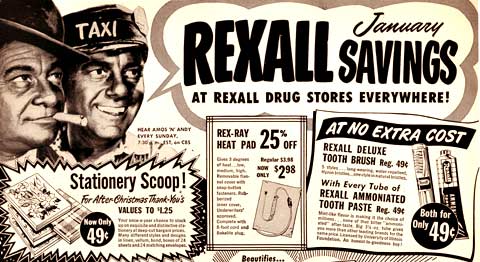 Amos Jones and Andy Brown hit the streets of Chicago fresh from Atlanta. Like hundreds of thousands of real-life blue-collar workers, and like Sam and Henry, earlier creations of Gosden and Correll, Amos and Andy were looking for work in the more industrialized North. But they were doing it just before the stock market crash that would plunge the U.S. into the Great Depression. If Gosden and Correll were interested in the out-of-work and out-of-luck, the world around them would supply them with plenty of material.

The two protagonists arrive in Chicago and find shelter in a cheap rooming house on State Street. There, they befriend Fred, the landlord, and George “Kingfish” Stevens of the Mystic Knights of the Sea, a fraternal order whose members are all named after fish.

The boys scrape up $25 and invest it in their own business, the Fresh Air Taxi Company. Before long, Amos falls in love with a gal named Ruby Taylor.