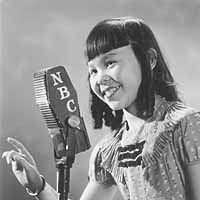 Arbadella was Amos’s daughter, appearing on several episodes of the radio series and three of the TV. Barbara Jean Wong voiced her on the radio, while Pattie Marie Ellis played her on the screen. The character was a big part of the annual Christmas episodes, which began running in 1940. Sometimes Amos would explain to her the significance of the Lord’s prayer, and sometimes a skit would center around a present she received.

Barbara Jean Wong (1924-1999) began working as a child and was known as “The Chinese Shirley Temple.” Barbara Jean Wong began making a name for herself  with many radio appearances in the 1930’s, appearing on such big shows as Lux Radio Theater, Hallmark Playhouse, and Cavalcade of America.

After her years on Amos ‘n’ Andy, she went on to appear in such films as “The Trap,” “That Brennan Girl,” and “Chinatown at Midnight.”
amos daughter arbadella Barbara Jean Wong cavalcade of america hallmark playhouse lux radio